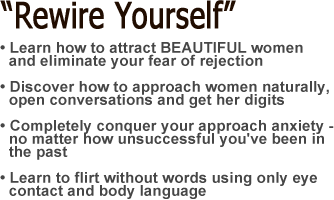 PUA Training is Now in Session

One On One Private Pick Up Artist Bootcamp

Laying On The Couch At Home
Trying To Learn How To Get Girls From A Book Or A DVD
Can Take You FOREVER!
We all know that this area of your life is worth getting handled.

When you don’t have this area of your life handled, it’s like this distraction going on in the back of your mind while you’re busy living your life, constantly creeping in as a voice every time you see a girl you like. To no avail we fail to approach, and we fail to succeed. Physical attention and companionship are basic human needs, you must achieve this or serious mental dysfunctions can occur. Trying to live your life starved of women is like eating fried foods every day, you lose ambition and motivation to live your life the way it should be lived, with health and freedom! You can do it, but it’s heavy, depressing, distracting and it slows down your other goals. Time is your most valuable asset.

Talk to any rich man, and he’ll tell you if its broke fix it! He’s had the realization: “The only thing that I can’t buy more of on this planet is time.” And that’s the truth. Just to read it, it’s soo obvious. Honestly, have you ever thought about how much time you have wasted and how much time you have left? Because right now time is being drained from you.

If you’re doing anything on your own to get this area of your life handled you’re probably going about it like most guys, you’re spending a lot of time and energy trying to get your dating life handled by one of two ways (or possibly both).

The first – trying to learn it from books and dvd’s that come from people who have interesting theory but who aren’t focused on what it takes to apply what they’re talking about.
Or the second – you’re trying to learn it from friends and acquaintances who are decent at it themselves but don’t know how to explain what they’re doing or look at you weird if you aren’t as cool as they are.

The first way is like a quick fix to take your-self up a notch. You can go from being a guy who is clueless to a guy who at least understands the game and stops getting played, you learn what’s really going on but have very little understanding the timing and when to apply these skills.

So next, if you’re lucky, you find guys who are decent at it themselves. These guys are good to learn from, because they have “just have it” and you can maybe absorb their vibe by osmosis. But there are limitations to that as well. Because if you try to talk to them about what they’re doing, so that you can understand it, they all say the same thing… “Just be cool man.” “Be confident.” “Be yourself.”

You will never get honest feedback from these guys because they are hardwired to win and beat out the competition. They want tell you how because you would become another guy they would have to compete with. Why would they do that? THEY WANT!! The good thing about these guys is that the advice they give you is spot on. It’s some of the best advice you’ll ever hear. But the problem is that it’s also the exact same generic advice that you (and most other guys) have been hearing since you’ve been a kid. If it was that simple… then every average guy would have gorgeous women crawling all over him. Unfortunately this just isn’t the case… The Bottom Line:

The Way You’re Approaching Your Dating Life Isn’t Working.
What it comes down to, is that you’re not learning from people who can explain things in a way that you can learn by or apply. It’s not their job to understand how to explain or articulate to you what it is that they’re doing. In fact, they might get annoyed or confused when you ask. You can try to act like them. But unless you’ve made a real life change, then trying to act like them will just seem obnoxious or contrived. It’s incongruent, and will only frustrate you more. Clearly, there ARE guys out there who are getting real results… But you aren’t one of them. That’s because wasting time trying to interpret the stuff that you learned from guys who don’t understand your specific needs, or even truly care about your succes… IT’S JUST A WASTE OF YOUR TIME!

"A good investment, Pierce knows his stuff. He went above and beyond what I expected"

"Pierce noticed my sticking points immediately and offered practical solutions to fix them. He possesses a unique blend of patience, honesty, and positive encouragement that got me out of my comfort zone and achieving results. What separates Pierce from the rest of the coaches is that he takes a personal pride in my success and doesn't view me as a dollar sign. This is evident in the extra time he has spent with me in person as well as through e-mail and texts when the sessions are over."

"This is the only bootcamp I've taken where I had two instructors focused on JUST ME."

"Pierce is great! Although I must say the biggest benefit I got out of the weekend bootcamp was the in set coaching from the smoking hot female instructor. It was great to have a HB10 open sets with me, and then tell me from HER perspective what was and what wasn't attractive about my game."

"Best money I ever spent on self improvement. Pierce was able to quickly find weak points I didn't know I had, and then pushed me all weekend to overcome them. "

"This one is at a really high level"

"Becoming a PUA is not just about picking up women. It is about striving to become the best person that
you can become and applying those techniques to your everyday life. Through Pierce's techniques, my
confidence is at an all time high, my work ethic has improved, and I have the girlfriend that I have always
wanted. By taking this course, not only will you be able to pick up more women, but I truly think it will
enhance all areas of your life."

"By the end of the night I felt comfortable enough to do anything. I would have swim naked in the ocean or whatever else he wanted to do"